There are two paths to the future of our food and farming. The path of life is based on co-creation with nature and her principles of diversity, giving back and sharing the earth’s gifts. The path of death is the industrial path based on fossil fuels and poisons, of war against the earth and her biodiversity. This path was paved by the Poison Cartel, the group of corporations born during WWII to create chemical weapons, which were redeployed as agrichemicals. Consequently, industrial agriculture has eroded biodiversity, disrupted the planet’s climate systems, desertified soils, destroyed water systems and is leading us to the sixth mass extinction. If we continue on this path of death we close our future. If we return to the path of life, of farming with nature, we have a future. All over the world, small farmers and gardeners are already implementing this agriculture: preserving and developing their soils, their seeds, practising agroecology, sowing the seeds of our future.

The path of life

The diversity of cultures of food and agriculture are united through the common and perennial principles on which life is based.

The first is the principle of diversity. Nature does not work on the principle of sameness, uniformity and monocultures. The natural world is a constant striving for diversity of expression. The cultural diversity of food and agriculture flows from nature’s ways and her biodiversity. The monoculture of the mind and the imposition of uniformity on seeds, on farming, on diets, on knowledge systems, on economies, is a product of the colonising mind and fossil fuel industrialism based on extractives. And it has resulted in the sixth mass extinction with species being pushed to extinction at 1000 times the natural rate.

Sharing the earth’s gifts in the commons is the third principle that flows from nature’s laws. Since life is a web of life based on interconnectedness, no part of nature belongs to one species, one person, one corporation. Food begins as seed. Seed and Biodiversity is a commons. Knowledge has evolved as a commons. Seed and knowledge is not the “intellectual property” of corporations. Patents on Life and patents on Seed are enclosures of the biodiversity and knowledge commons. Since food is the currency that weaves the web of life, food is also a commons. In the paradigm based on nature’s principles of how life works, food is not a commodity.

These principles have created food systems that have lasted over centuries, and sustained all life because they walk the path of life as laid by nature. They are based on co-creation with nature, not conquest of nature. 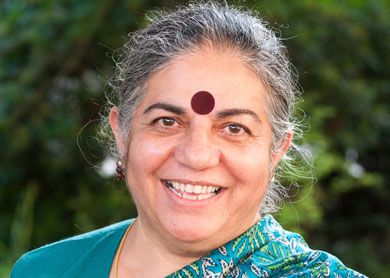 Dr Vandana Shiva trained as a Physicist. In 1982 she founded an independent institute, the Research Foundation for Science, Technology and Ecology in Dehra Dun, which is dedicated to high quality and independent research to address the most significant ecological and social issues of our times. In 1991 she founded Navdanya, a national movement to protect the diversity and integrity of living resources, especially native seeds. Dr. Shiva has contributed in fundamental ways to changing the practice and paradigms of agriculture and food. Her books, ‘The Violence of Green Revolution’ and ‘Monocultures of the Mind’, have become basic challenges to the dominant paradigm of non-sustainable, reductionist agricultural practices. Dr. Shiva is a Founding Board Member of many important organizations such as the International Forum on Globalisation and Diverse Women for Diversity. Time Magazine identified her as an environmental hero in 2003. She received the Right Livelihood Award in 1993 and the 2010 Sydney Peace Prize.