There are social and environmental imperatives for sustaining agricultural biodiversity in all food systems, not least because its dynamic management helps confront the climate, biodiversity, and nutrition crises. It is broad in origin, scope, and functioning and has coevolved with people over millennia, embracing the diversity of all living beings within agroecosystems. It is much more than the diversity of seeds of the relatively few crops that are dominant in the industrial food system. There are many threats to agricultural biodiversity, especially from industrial monocultures of proprietary seeds, yet its international governance is broadly hostile and ineffective in reducing its erosion. Its control is contested by competing forces of which the ecological food provision coalition, that champions peasant agroecology and food sovereignty, defends and promotes heterogeneous seeds and high levels of agricultural biodiversity embedded within all production systems. This should become a dominant attribute of responsible agriculture and food systems.

Agricultural biodiversity has been developed over millennia by women and men peasant farmers and gardeners, herders and pastoralists, fishers, forest dwellers and other small-scale food providers. It encompasses the variety and variability of animals, plants and micro-organisms which are necessary to sustain key functions of the agroecosystem, its structure and processes for, and in support of, all food production.

Food systems based on biodiverse agroecology, especially as practiced by peasants in the framework of food sovereignty, can mitigate the existential climate, biodiversity and nutrition crises. But key to the effectiveness of this approach is that heterogeneity is embedded in all the seeds, breeds and agroecosystems used for food production. Agricultural biodiversity is heterogeneous and is intentionally enhanced through the dynamic management of varieties, breeds, species and ecosystems.

Industrial monocultures, intensive livestock production and large-scale mechanised fisheries, promoted profitably by powerful corporations, are the main cause of the loss of biodiversity and are also principal drivers of climate change. Few species of plants and animals are dominant in the industrial food system. More significantly, it is the rapidly diminishing number of varieties of crops and breeds of animals –currently grown and raised, in monocultures, in fields, pastures, waters and CAFOs – that is of greatest concern. These proprietary seeds and breeds are overwhelmingly favoured by the international governance architecture that should, as a priority support the in situ conservation of all agricultural biodiversity. Its effects are hostile, including trade rules, which may not discriminate in favour of the conservation of agricultural biodiversity. Peasant Seed Systems are ‘collateral damage’ in the international governance of seeds, which can criminalise those who enhance biodiverse agroecology, based on heterogeneous seeds and agricultural biodiversity. In contrast, peasant seed systems, with twenty-fold more numerous varieties of peasant seeds, adapted to territorial diversity, are governed by peasants themselves, respecting their collective rights (see Fig. 1). International governance is contested by the ecological food provision coalition, which champions high levels of agricultural biodiversity and heterogeneous seeds embedded within all production systems. 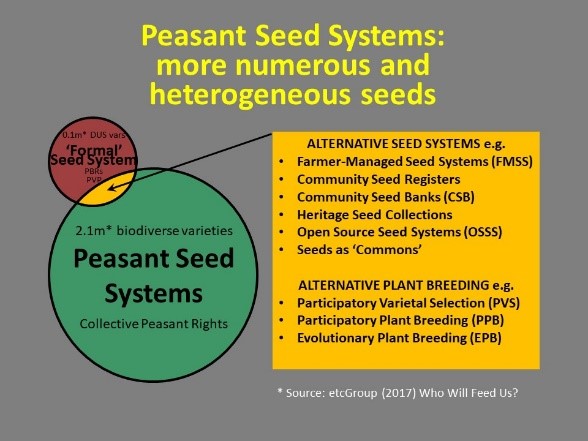 The production practices of peasant agroecology are based on ecological principles including building life in the soil and waters, recycling nutrients, and the dynamic management of biodiversity. Optimal functioning of ecosystem processes, at all levels, depends on the degree of inter- and intra-specific, and inter- and intra-varietal, heterogeneity that exists within biodiverse agroecosystems, at all scales of production, in gardens, fields, pastures, ponds, forests, landscapes, watersheds and coastal waters. The development of these more ecologically complex, biodiverse and heterogeneous ecosystems should be the priority for scientific research and innovation, encompassing indigenous knowledge and peasant practices.

This heterogeneity needs to be expressed:

It is therefore imperative not only to maintain and enhance the diversity of crop species and varieties on-farm, as peasant agroecology and peasant seed systems achieve, but it is also essential to sustain their heterogeneity as well as enhance the number and heterogeneity of associated species above and below ground. For example, more heterogeneous populations of soil microbiota in organically managed, biodiversity-rich soils, improve soil health and hence the productivity of plants and the diversity of rumen and digestive tract micro-organisms. Despite the hostile environment of the dominant governance architecture, increasing heterogeneity in production systems can be officially sanctioned. For example, organic heterogeneous seeds and heterogeneous ‘populations’ of single species, can be marketed in the EU without complying with the requirements for registration and certification needed to register a uniform variety.

Increasing the embedded heterogeneity within the food we eat could easily be promoted, if, and with due homage to Michael Pollan, one could urge citizens to: ‘eat more biodiversity, mainly heterogeneous plants, but not too much!’ And increasing the spread of knowledge of what needs to be done could be easily achieved if pushed by public-interest bodies, governments and, collectively, in the United Nations with support from Civil Society (as in e.g. the Committee on World Food Security).The UN should also exercise its responsibilities to strictly regulate corporations.

To achieve the required changes, two approaches could be useful:

Read a blog based on this chapter entitled Seeking New Agreements for Working with Nature through Enhancing Agricultural Biodiversity. 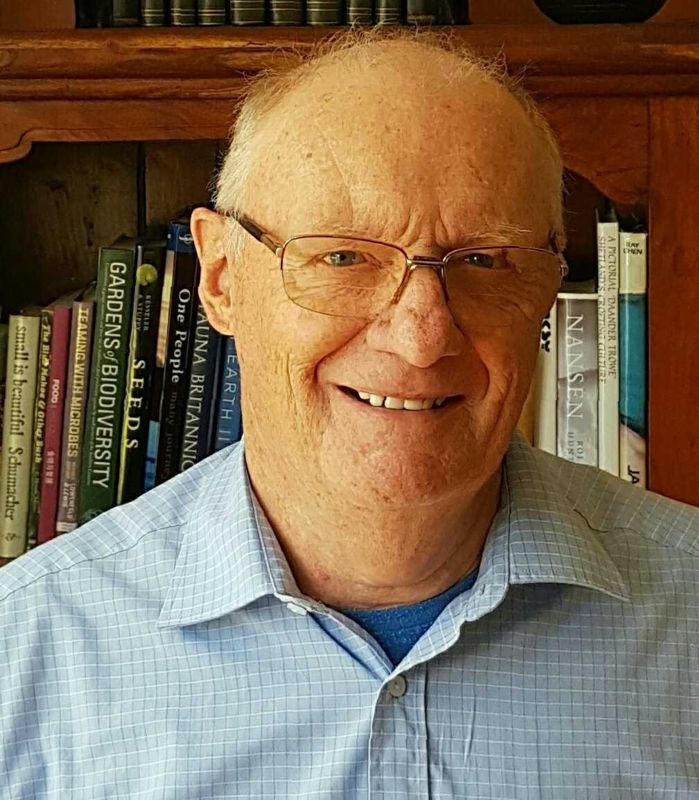 Patrick Mulvany is an Honorary Research Fellow at the Centre for Agroecology, Water and Resilience of Coventry University and a member of the UK’s Food Ethics Council. His work focuses on policy and practice to realise food sovereignty, enhance agricultural biodiversity and agroecology, and the related issues of the governance of food, environment and technology. He was formerly the senior policy adviser to Practical Action/ITDG and Co-chair of the UK Food Group and the NGO Committee of the CGIAR; and was an NGO member of IAASTD’s governing bureau, FAO’s Technical Advisory Group for the State of the World’s Biodiversity for Food and Agriculture, and BBSRC’s Bioscience for Society Strategy panel. He’s been active in the civil society lobbies on agricultural biodiversity at FAO and the CBD as well as in the international, regional and national food sovereignty networks, including the Agricultural Biodiversity working group of the IPC for Food Sovereignty.