Social Movements in the Transformation of Food and Agriculture Systems

Abstract The radical transformation of our food systems is necessary to addressing the social and environmental crises of our time. This can only be led by grassroots social movements, as the solutions that come from corporate, governmental and philanthropic actors are false solutions that maintain the status quo. They find legitimacy by misportraying the nature of the problems to be solved and promoting deeply entrenched narratives of lack. This chapter explores these and counters that we already have the solutions to create sustainable, ecological food systems. It advocates for a transition to a food system based on vegan agroecology, where non-human animals are included in our circle of moral concern, and speaks of the stirrings of a new movement: the veganic farming movement.
Read more

On Animal Liberation and Seed the Commons

We also created Seed the Commons because as animal liberationists we didn’t have anywhere to plug in and promote agroecology in a way that included nonhuman animals in our circle of compassion and moral concern. Worse, as these movements grew, they were promoting a vision of agroecology and sustainability that legitimized animal exploitation. To continue to play a supportive role without contributing our own ideas was effectively to promote animal agriculture. How could I give up my ethics for my activism? I’ve since met many vegans who had faced the same dilemma; some of them abandoned activism, others abandoned veganism. Seed the Commons was created as a third option, a place for vegan activists to work toward the radical transformation of our food system without compromising our ethics.

A vegan ethic defines the parameters of the work of Seed the Commons. This is revolutionary because as an ideological minority, vegans tend to defer to majority norms and this had deeply shaped animal rights advocacy. By this I mean that while vegans have taken the step of rejecting one set of normative practices (e.g., those relating to personal consumption), there are other ways in which our behaviors and cognitive biases continue to reflect the normativity of the consumption of animal products. The norms by which majorities live are invisible and don’t require negotiation, but both majority and minority groups relate very differently to minority norms.

Vegans continue to act and advocate in ways that draw a line between animals, reinforcing the social norms that uphold certain animals as food. While vegans refrain from eating “farm animals,” these often remain potentially on the table because there lacks a deeper internalization of a new set of norms. Farm animals maintain their categorization as food even if one refrains from eating them. This is evident in the stories of ex-vegans, who upon deciding that there is reason to consume animals, revert to consuming those that our culture sees as food but would remain steadfast in avoiding dog or cat meat.

At Seed the Commons, we made the conscious decision to reverse this—to treat our own ethic as normative and to act as we would if we were a majority. We did not promote veganism as a solution to climate change or social justice issues, or explore the connections between animal exploitation and other forms of oppression. Simply, when Seed the Commons offered community food justice and healthy cooking workshops, the food was vegan by default. When we offered gardening workshops, these were veganic. When we founded an annual forum on radical food politics, our vegan ethic determined that the agroecologists we invited were vegan, and the world we spoke of building was one in which the exploitation of cows, pigs, and chickens was no more on the table than that of dogs and cats.

To normalize a vegan ethic and to counter the myth that a sustainable food system required animal exploitation, one of our first priorities was to grow the visibility of, and build platforms for, veganic farmers. This put us at odds with the larger movement, which not only includes animal farmers but has also become a point of legitimization of the deeply entrenched habits of broader society. Already invested in analyzing the messaging and dynamics of power that allows food industries to advance their goals, we brought this analytic approach to the role that the food movement plays in maintaining the status quo of animal exploitation.

On Grazing, Colonial Discourse and the New Environmentalism

In the United States, Manifest Destiny was the philosophy that legitimized the official and white supremacist state policy of organized and systematic genocide of native peoples to appropriate their land and its resources. It was believed that it was the destiny of the United States to expand its dominion across North America. The transformation of the West through agriculture was a big part of this; the land itself was brought to its destiny and full potential by being tamed and reshaped through agriculture. Native Americans were to be Europeanized, the measure of which was to adopt European agriculture and do away with native foodways. In California, the acculturation of Indians and their integration into white society was mainly effected on the ranches (Fischer, 2015).

The land in the United States went from having a complete lack of pasture for cattle and other domesticated animals in the early 1600s (Sponenberg, 1992) to between a third to 44% of US land currently reserved as range or pastureland (Merrill & Leatherby, 2018). For at least 100 years, land for grazing has been the largest type of land use in the continental United States. In effect, our current situation is the culmination of Manifest Destiny.

Many grazing advocates are co-opting the currently popular discourse around decolonization to promote a model that has been central to colonization. Interestingly though, the colonial history of ranching is not entirely erased, but rather has been integrated into a narrative that benefits ranchers. Justifications or obfuscations of colonization often rely on portraying the colonized as being helped or saved through the actions of the colonizer, or on the erasure of the colonized or aspects of their culture, resources, or experiences. Natives were civilized by the settler’s culture, or alternatively, colonized lands were unused expanses ready for the taking. The perceived idleness of indigenous people and the land through which they fed themselves is one such case of erasure. And so now ranchers present themselves as the solution to the very problem caused by their forefathers, that is, the disappearance of native ruminants.

The case of the tule elk in the Point Reyes National Seashore in Marin County, California, is a contemporary lesson in the conflict between native wildlife and cattle, the continued political power of ranching interests, and the opportunism around the regenerative grazing discourse on climate change. It is estimated that up to half a million of these large herbivores roamed California when Europeans arrived in the late 18th century. Like the bison, these numbers crashed due to market hunting. By 1870, they were believed to be extinct. Only when a small herd was discovered in the mid-1870s did limited conservation efforts begin. By the late 1970s, the tule elk were reintroduced to Point Reyes. The reintroduction kicked off a new cycle of conflict between the wild animals, the cattle, and ranching families, who saw their lucrative businesses threatened by the animals that their predecessors had eliminated from the land just a couple of generations before. Ranchers have called for management of tule elk herds, including by killing and relocation. Fencing has already caused substantial problems as it constrains the natural movement of the elk. The death of some elk during a drought was caused by ranchers’ fences blocking the elks’ access to water sources, according to several environmental organizations that sued the park for illegally renewing the ranchers’ leases. The ranchers’ response has been to appeal to politicians and to the public, in both cases very successfully.

This recently created settler industry has unironically sought to gain public appeal by presenting the ranches as a “historic use” of the land. In 2018, 17 ranch properties were listed on the National Register of Historic Places (Nelson, 2019), complete with displaying quaint “historic ranch” signs outside each with dates of establishment. “Exactly what history are we talking about?” and “Is this a legacy we wish to preserve?” we may ask. Without critical examination, the historic designation is a facile suggestion of wholesome tradition.

As the well-off children and grandchildren of colonial profiteers demand to continue to make money off native land, they manipulate the public’s ignorance of history and Eurocentric biases to further expand the colonial experiment. Regenerative grazing is ultimately another false solution, peddled by a privileged class to maintain the status quo of their lucrative industry and public concessions. While many environmentalists are wise to the PR of the corporate world, they have been easily seduced by the vision of ranchers as stewards of the land. 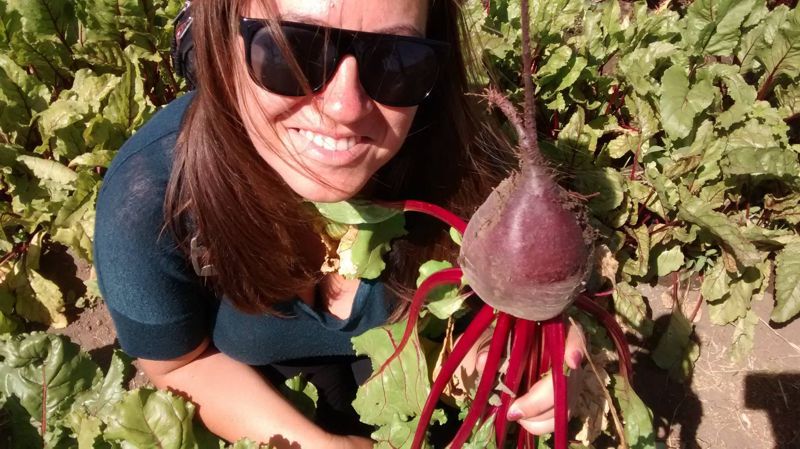 Nassim Nobari is the co-founder and director of Seed the Commons. She holds a masters in psychology from the University of Lausanne, where she focused on the social representations of food and the ways in which social identity impacts meat and milk consumption. After her studies, she worked at several human rights NGOs in Geneva and started volunteering with La Via Campesina as a translator and interpreter. In 2005, Nassim opened the first vegan restaurant in the Lemanic Arc–an activist project in a squatted building. Alarmed at the increasing legitimization of animal agriculture by the food movement, in 2009 she co-founded Seed the Commons to help build just and sustainable food systems without animal exploitation. Through the creation of platforms for veganic farmers as well as public education and outreach, Seed the Commons has been key in popularizing veganic agriculture and building the movement for a veganic food system.